I ran a day of demo games with a group of tabletop gaming fans showcasing their favorite "alternative" games in a store devoted to the top couple of miniature companies.  I set up a basic scenario which could accomodate 2-5 players.

On the "starboard" side of the table I had a rocky cove set up, flanked by some crumbling ruins and centered around a lighthouse; on the "port" side was deployed a damaged Elven flagship with only a single squadron of destroyers running escort duty.  The objective for the Elven player was simple--get the flagship with the First Sea Lord to any place between the ruined pillars behind the lighthouse where Elven shore batteries could drive off any attackers.  Other players would either play allied squadrons of Elven ships helping to ward off attackers or Dwarven, SM, or BG squadrons attempting to sink or capture the Elven flagship.

I had two very interested players, and although one was interested in playing the Bone Griffons, the other really preferred to play Dwarves, particularly the "magic" Dwarves in the cast iron ships.  They also wanted to play against each other.  So, I quickly modified the scenario, removed most of the other squadrons, and the SM player had the objective of moving the "heavy cruiser" (yes, it's a SM battleship but I had a card printed out with stats for a heavy cruiser) to the safe haven behind the lighthouse while the BG ships attempted to sink or capture it. 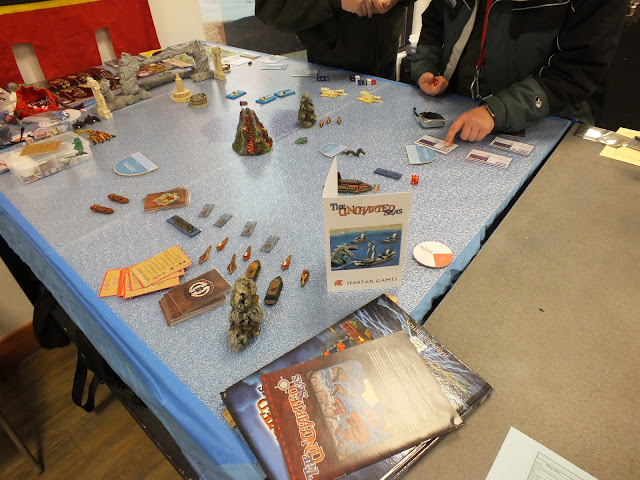 I restricted the space on the table, and the Shroud Mages started 12" in from one corner while the Bone Griffons started 12" in from the other corner on the same table edge.  The fleet of Iron Dwarves among the STAR cards deck marked off the 12" out of bounds, so the players were effectively playing on a 3x3 foot area.  All the better to get them to the meat of the action, and by the end of turn 1 we had the heavy cruiser firing at submerged undead whales (to no effect), and a squadron of SM frigates closing on the squadron of BG cruisers.

The center of the board represented shallows, and I explained that only small surface models could move across that area, between the volcano and rocky island.  The BG player, on turn 2, surfaced his orca, deciding not to circle around to intercept the heavy cruiser (especially after the heavy cruiser changed course to follow the frigates and take chances with the oared galleys), and moved across the shallows to head directly toward their objective. 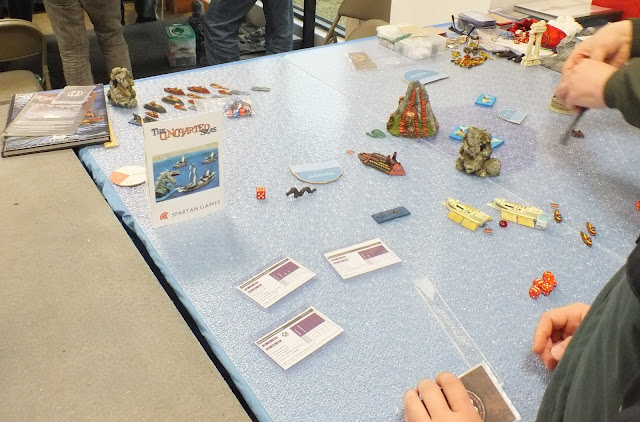 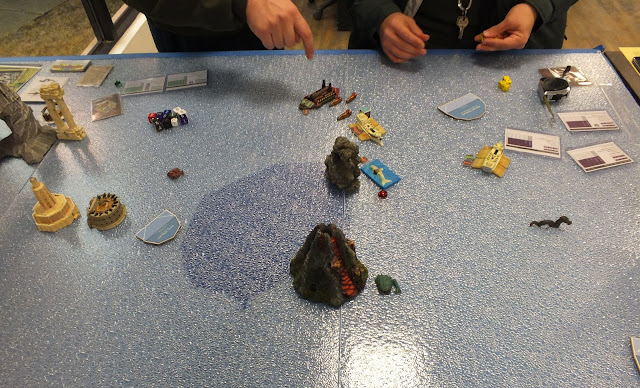 The sea monsters, by the way, are only obstacles in this game, like terrain.  Turn 3 was quite exciting:  the squadron of orca moved to ram and board the heavy cruiser, but only 2 managed to reach the SM ship; a fast and furious boarding action damaged the target, but the boarding parties from both orca were absolutely destroyed.  The heavy cruiser moved to trade broadsides with the squadron of oared galleys:  all ships took some damage, but no criticals.  During the 4th turn the heavy cruiser moved to a stern raking position on one oared galley, and a double critical hit damaged the propulsion and rudder both, leaving it to drift ahead only 2". 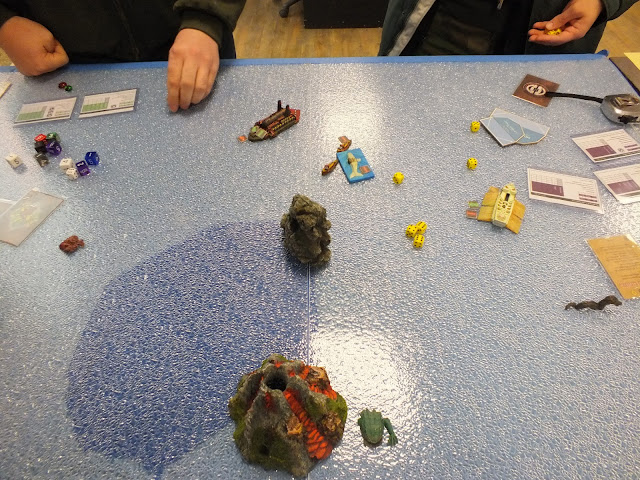 The last remaining orca moves to collide with 2 SM frigates at once; it was a gamble, and it didn't pay out--one frigate was lost to the ramming, but the other managed to resist the boarding action and destroy the last of the undead crew on the whale. 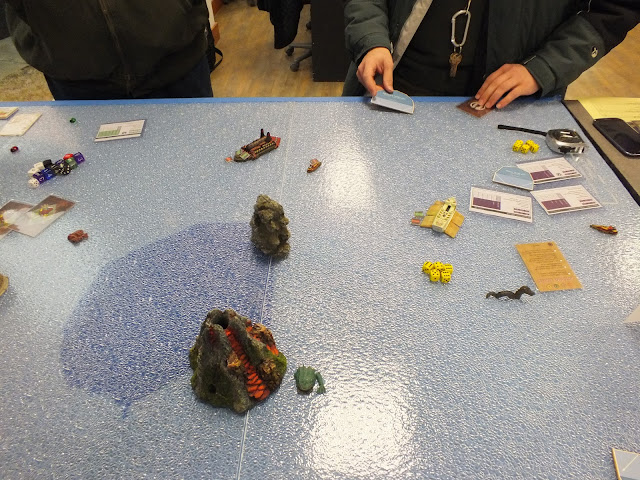 Finally, with only 1 cruiser limping in the water with a single hull point while the heavy cruiser still had more than 50% hull points and was within sight of the harbour, the player of the Bone Griffons conceded the game.  The two new players had completed 5 turns in under an hour with fewer than 300 points worth of ships per side. 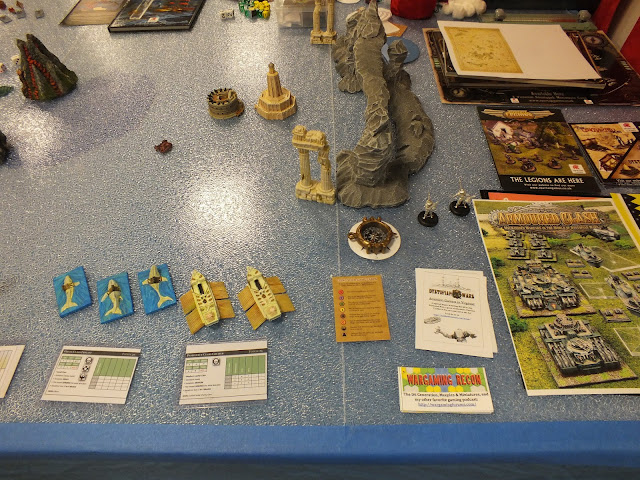 Canoes Are Boats Too!

I've done almost no naval gaming these past few months, but I should admit I've still been busy.  During this past summer I bought a copy of Muskets & Tomahawks, convinced by the review I heard on the Meeples & Miniatures podcast epidsode 88.

I liked everything I read; the rules are relatively simple and familiar, but there is definitely an 18th century theme.  I visited a local Hobby Lobby and picked up several inexpensive packs of Indians and Colonial Infantry in 1/72 scale plastic, along with some discounted Christmas trees for cheap terrain.  All together, less than a hundred bucks for the rules, cards, a wide range of figures, and terrain.

Email ThisBlogThis!Share to TwitterShare to FacebookShare to Pinterest
Labels: French and Indian War, Muskets and Tomahawks

The goal of this campaign is to develop a fleet and engage in missions to secure gold by transporting cargo to and from the Old World or simply seizing it by raiding villages or securing valuable cargo from shipwrecks.  The first player to accumulate 10,000 Gold Bars is declared the winner of the campaign.

I'm concentrating more of my online activity on the ManBattlestations site, and Ruckdog just posted a blog post describing the series of games we just played of Dystopian Wars for a local X-Campaign here.

More details can be found on the forum side of the website: http://manbattlestations.com

We had several players cancel at the last minute to prepare for the oncoming storm, but we had 7 players show up--Zach played his first game during round 2 and I teamed up with Kyle in the final round so everyone could play.

FORMAT:
We have linked scenarios to create a mini-campaign for the tournament.
Players will form teams of 2 players.  1st round will involve randomly matched players.  2nd round will provide choices for teams, according to score rankings from 1st round.  3rd round will feature the winning teams on big tables battling for key locations to win the campaign and the overall event.

FORCE COMPOSITIONS:
750 points, Naval and Armored Core Forces.  Teams may have multiple force lists and choose which force to use at the start of each round.

STAR CARDS:
No standard STAR cards will be used.  Special cards will be provided for teams to use during the event which provide special effects.

PAINTING:
Models must feature at least 2 different colors.  Prime ships and then dry-brush or ink—it takes only an hour or two to make your fleet look good on the table.

HOW TO REGISTER:
Post your registration on the Game Vault forum or on ManBattlestations.com or send a PM to “maddrb”.

NEED A TEAMMATE?
Check the “looking for teammates” thread on the ManBattlestations.com:

One more day left to register for the DWVA Autumn Event at the Game Vault on Sunday, October 28th and get one of these DW flag decals.

Players registering with me by Sunday, October 7th can pick up a free 5x8 inch flag decal the morning of the event. 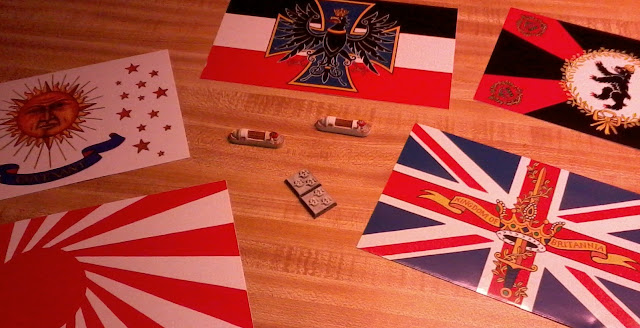 Deadline for registration is October 21st or 16 players, whichever comes first.  Contact me on the Spartan Games forum or at ManBattleStations.com to register, or leave a comment below!
at 6:22 PM